Wedding-cake Bakers and the Constitution

David Mullins and Charlie Craig live in Colorado. In 2012, same-sex marriage wasn’t allowed in that state, and the Supreme Court’s decision was three years away. So, they decided to travel to Massachusetts, where gay marriage had been legally recognized since 2004, and then have a wedding party back home.

Little could they have imagined that they were setting the stage for a Supreme Court confrontation, which is scheduled for hearing before the nine Justices next month. The name of the case is Masterpiece Cakeshop v. Colorado Civil Rights Commission, and it involves a conflict between a baker’s religious beliefs and the public accommodations law of Colorado. It also involves whether an artistic wedding cake is a form of expression entitled to constitutional protection.

The facts are not in dispute. David and Charlie went to see Jack Phillips, the owner of Masterpiece Cakeshop in Lakewood, Colorado. As soon as Jack understood that they wanted him to make a cake for their post-wedding party, and without discussing what the cake would look like, he terminated the discussion. Jack’s religion teaches him that marriage is between a man and a woman, and for him to provide the “centerpiece” for the celebration of a same-sex wedding would, as he sees it, represent an expression of his approval.

Jack’s problem is that under Colorado law, anyone offering goods or services to the public may not refuse to do business with someone on account of his or her race, creed, color, sexual orientation, or other factors. It is one of more than twenty states, including New Hampshire, where sexual orientation is included as one of the protected categories.

David and Charlie complained to the Colorado Human Rights Commission, which ruled in their favor. The Colorado courts upheld the Commission’s decision, concluding that people seeing the cake would not think it represented a “statement” by the baker, especially since the parties never even got around to discussing the design of the cake. Jack then asked the Supreme Court to grant certiorari, meaning to review the case. It takes at least four members of the Court to get past this hurdle, and the fact that Jack was able to do so is no small accomplishment, since the Court accepts less than a hundred cases each year.

The case has attracted a great deal of attention. Not only have the disputing parties filed written arguments, but so have more than a hundred individuals, groups, and governmental bodies, who have deposited some 95 amicus curiae (“friend of the court”) briefs in the Clerk’s office.

The Department of Justice has weighed in on Jack’s side, as have such religious organizations as the Billy Graham Evangelistic Association, The Thomas More Society, and Agudath Israel of America. Backers of David and Charlie include the General Synod of the United Church of Christ, The National Women’s Law Center, and a group called simply “Chefs, Bakers, and Restauranteurs.”

My personal favorite is the brief filed by the Houston law firm of Baker & Botts on behalf of a group of individual “cake artists.” The “Baker” in the firm name is James Baker, former Secretary of State, not to be confused with the cake baker artists his firm represents. They claim not to care how the case comes out so long as the Court recognizes that what they do is a form of artistic expression. To prove their point, they include pictures of their handiwork.

This case raises two issues under the First Amendment. The first is whether there should be a “constitutional exception” (my term) to the public accommodations law in order to accommodate Jack’s religious beliefs. The second issue is whether Jack has a constitutional right not to engage in the type of expression his cakes represent.

I make no prediction as to who will win, but in my opinion David and Charlie should win. Colorado’s law is one of “general applicability” and does not single out any particular religion. Requiring Jack to sell his cakes to all, including a gay couple celebrating their wedding, in no way interferes with Jack’s right to worship as he pleases.

The speech question is harder. Jack relies on the Supreme Court’s 1977 decision agreeing with Jehovah’s Witnesses that they have the right to cover up “Live Free or Die” on their New Hampshire license plates. The opinion in that case says that the state may not require a person to use his car as a “mobile billboard for the state’s ideological message.” He also relies on the Court’s decision that the sponsors of Boston’s St. Patrick’s Day parade are not required to include a contingent of gay marchers.

This case is different. Here, there never was a discussion of the “content” of the cake. If the Court tells Jack that the Colorado law applies to him, as it does to all others doing business with the general public, that will not mean that he has to express himself in a particular way, much less one that might be taken as expressing his approval of gay marriage. It will simply enforce rights belonging to members of the public whom the law protects.

I see no way to distinguish Jack’s situation from that of a musician, a florist, a tailor, a bricklayer or, for that matter, a lawyer. Telling Jack that he must bake a wedding cake for David and Charlie will deprive him of nothing that the First Amendment protects.

Of course the parties might have a problem agreeing on just what the cake should look like, but that’s another case.

In his book, Claremont Boy: My New Hampshire Roots and the Gift of Memory, Joe shares his humorous and insightful recollections spanning more than half a century. 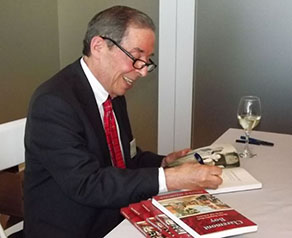 Joe Steinfield at a book-signing event in May 2014.